According to Dictionary.com, Bikram Yoga is “a type of hatha yoga characterized by a set series of postures and breathing exercises, performed in a very hot room.” 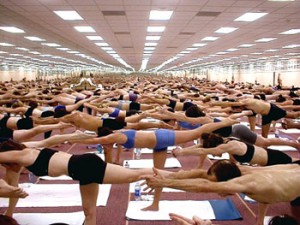 It’s the “very hot room” part that has most people talking. 105 degrees to be exact. When you first walk into a room heated up to 105 degrees, it’s like getting punched in the gut. You’re not quite sure what happened but you know you didn’t like it.

As a yoga teacher, I am asked all the time about different types of yoga – Bikram especially. So finally, with Groupon in hand, I went to my first ever Bikram Yoga class. Can’t hurt, right? (Famous last words?)

I approached Bikram with a lot of trepidation. I swim in sweat at room temperature so I was not looking forward to sweating more. Or worse yet, having someone else’s sweat splatter on me. And, of course, I was completely unprepared for my first class despite how many times I googled “how to survive Bikram” prior to going.

My first class was not a complete disaster but I was mentally unprepared for how difficult it was going to be. Suffice it to say, I didn’t quite make the 90 minutes. At 60 minutes I had to make the awful decision between walking out with tail between my legs or vomiting in the room. I opted for the walk of shame.

Other people would not willingly return after such a defeat but not me. I couldn’t stand the thought of failing at something yoga-related. So I came back… not just once but TWICE! (My belief is that you need to try something at least 3 times before you can have a respectable opinion on it. Belief excludes illegal and dangerous activities.)

I was better prepared the next time. My husband thought I was crazy as I packed my gear to try again especially when I ranted and raved after the first class. I looked like I was going into battle. I packed my water bottle with ice, wore shorts instead of pants, I brought a watch so I’d know how much time was left and I firmly planted myself by the door in the hopes of catching any breeze. Sure enough, it went much better and I made it through the 90 minutes with a smile on my face.

So the big question is: Will I be back? The answer is a firm NO.

I don’t want to offend Bikram lovers but it simply wasn’t for me. It was complete torture. When I tell people this, they always inadvertently imply that I didn’t have the mental stamina to practice Bikram. Some have demanded that I keep going until I learn to love it. But the truth is I spent all of my time at Bikram focused on making it through the movements and cursing the incredible heat. I wasn’t focused on my body and how it was feeling. I wasn’t thinking about how good it was for me. I didn’t feel glorious and open. I didn’t feel good. And I hated having to lock my knees! Sure, I felt tremendous pride in making it through but I didn’t like where my mind was while I was practicing.

So do I recommend that people try it? Hell yes! I admire the folks who practice Bikram and you should definitely have your own opinion on it. Don’t just take my word for it. But as for me? I will be keeping my distance.

What are your thoughts on Bikram or hot yoga?

I read. I write. I teach yoga. I wear my politics on my sleeve. I battle with my misanthropic tendencies. View all posts by Yogitastic

31 thoughts on “My short stint with Bikram Yoga”

This site uses Akismet to reduce spam. Learn how your comment data is processed.