I confess to being unfaithful… I have been working on another blog. A mistress, if you please. But it had to be done. This blog is tangentially-related to this blog in that it’s solely about food… Healthy food. Technically it’s my husband’s blog and it is all about the meals he is creating at home with the vegetables that I have a love-hate relationship with. But being that I am more technologically savvy – he cooks, I take pictures and slap it on the internet. He gets all the glory while I stuff my face with mushrooms and cheese. A win-win.

Without further ado, here it is: 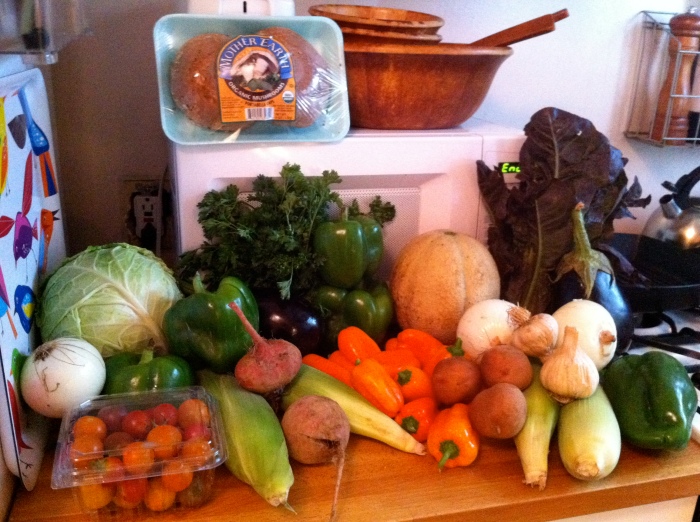 The second batch of vegetables from our CSA was a little more exciting than last week’s. I can’t wait to see what hubs will do with the eggplants and the portobello mushrooms!!

In case you were wondering what exactly all the hoopla is about below is our list of vegetables for this week:

For a few years now, my husband (a.k.a. “the cook”) has been enamored with Community Supported Agriculture (CSA). He liked the idea of supporting a local farm where he would receive high quality vegetables (often organic) and where growers  and consumers share the risks and benefits of food production. Sure, he would have no control over the seasonal vegetables that he received but that’s part of the culinary adventure! (Oh boy!)

We finally signed up and waited eagerly (him)/anxiously (me) for the first pick up. He could barely contain his excitement. I, on the other hand, was filled with trepidation at the veggies (a.k.a. my green nemesis) that were to come. As a child I was a really picky eater and it always turned into a vegetable showdown between my grandmother and 10-year old me. Sometimes she won and sometimes I sat at the dining room table for several hours – taking on the challenge of not leaving the table until my plate was clean.

Luckily, my husband has been patiently introducing healthy items into my diet over the years (i.e. I no longer bleed bacon grease.) He assured me that he could prepare all the CSA food in a way that I could ingest it without gagging. All he asked was that I be willing to try.

This week we picked up our first full share and to my horror our first delivery had okra in it. OKRA! I hate okra!! I have childhood memories of my grandmother force-feeding me okra! ::shudder:: (Unfortunately, my petition to rid the world of okra failed miserably.) But we survived this near disaster by swapping out the okras with green peppers. ::whew:: That was a close one!

But then another problem presented itself. We had a busy weekend planned and it would require several meals being eaten outside of our home. Now we were in danger of food going to waste. A prospect neither one of us could stomach. But at what price? I didn’t want my life to revolve around food! Something I swore I would never do! Plus, it’s still nice out! I socially hibernate during cold weather so I have to get all my socializing in now before I have to whip out my long johns! “I refuse to stay home!” I loudly declared. “Well, I’m not throwing food out!” he yelled back.

It resulted in a tense standoff with hubs on one end holding a zucchini and me on the other holding a beer. Who was going to win this showdown?

Ultimately, we both did. Like all great peace treatises, we compromised. We tweaked our going-out plans a bit to allow us to eat dinner at home before heading out with friends. Crisis averted. For now.

It is not always going to work out so neatly and it will take some major adjustments so that we don’t end up wasting food. But I am proud of this commitment and I hope that it will make a difference. Good for me and good for the environment.

I will let you know how we fare at the end of this vegetable experiment.

If you have any advice on getting through and thriving or if you have any experience you’d like to share, it would be really appreciated!